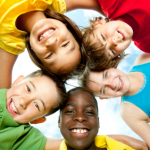 public school teacher, I questioned my niece as to why she wouldn’t send her children to public schools.  She has seven children, all under age 12. She is opting to homeschool her children for a number of reasons.  One of them is that she wants to protect her children’s innocence as long as she can.She is a Harvard graduate and a lawyer, but she has put her career aside in order to  select her homeschool curriculum,to teach her children herself and to  monitor each child as s/he grows intellectually, socially and spiritually .

In addition to homeschooling, she is extremely vigilant about her children’s TV watching and use of computer time.  The family owns a small, 12 inch screen TV, and it is primarily used to watch DVD’s and sports channels.  Yes, she only allows G-rated movies. She monitors educational gaming on her computer which is in her full view. You can imagine that these children are the most wholesome, innocent, pure, and loving children I have ever encountered.

I bring this up because the Gay, Lesbian, Bisexual and Transgender Round Table of the American Library Association is continually endorsing new pro-gay books to schools for their libraries. At one school where I used to teach, the school adopted a community read of one of the recommended books. Everyone in the school would read the book.  Students would follow along as their small group mentors, their teachers, read the book to them.

At first glance, the book that was selected is a wonderful, anti-bullying book.  It depicts how many students are marginalized because of their differences.  I applauded the school’s decision to read an anti-bullying book as a community read.  There is an awful lot of bullying at the middle school level, and I thought that the book would bring the problem up for discussion and hopefully stop the bullying. What I did not condone was the choice of the book and the manner in which the book would be read. In my opinion, the book does an excellent job at exposing the bullying of different groups, including same-sex attracted youth. But, it also subtly promotes the gay agenda.  For example, one character in the book advises a homosexual boy to go along with his feelings because “ if it feels right it must be right.”

I’m not sure how you interpret that line, but I interpreted it as an endorsement for the gay lifestyle. It also is sending the message that whatever feels right is OK. Well, for many of my students, having sex at age 12 feels right. To some stealing feels right.  To some, cheating feels right.  How can a school district force a teacher to read such a statement to his/her class?  A teacher is a role model, and as such has some power of persuasion when he or she says something.  For me to read, “If it feels right, it must be right,” is tantamount to my endorsement of that statement.

For this reason, I submitted a letter to the principal telling her why I could not read the book.  She did not reply, but the next year, the same book (which was slated to be read again to the incoming class) was removed from the required reading list. I think she was afraid that I would make an issue of this with the school board, and she didn’t want to have to defend that line, and others like it, herself.

While the majority of parents cannot homeschool as my niece does, we can monitor the books that are being selected to read at home.  We can also monitor the games and shows watch on TV and gaming devices. We keep our homes safe by locking doors and keeping the lights on.  We should also protect our children’s values by monitoring what they read and are exposed to in school and elsewhere.