Activist-Blogger Claims on National Television He “Probably Would” Have Sex with Someone Who Has AIDS, Calls Abstinence “Reckless” and “Irresponsible” 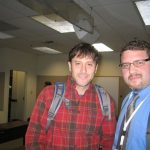 Anti-Ex-Gay Activist-Blogger Wayne Besen with Liberty Counsel’s Matt Barber at the 2010 Awakening Conference at Liberty University. Besen was posing as an undercover college student when he was called out and shockingly, embraced and loved by Barber, one of those “hateful, bigoted” Christians.

In a shocking display of ignorance and irresponsibility, anti-ex-gay activist-blogger Wayne Besen admitted on national TV that he has, and “probably would” again, have sex with a person infected with HIV/AIDS as long as he wore a condom, although it’s not “optimal,” and that efforts to reduce HIV/AIDS with abstinence, faithfulness, and partner reduction are “reckless” and “irresponsible.”

You can watch Besen’s confusing, contradictory, and troubling statements by clicking here and viewing the 2009 Fox News O’Reilly Factor footage, hosted by Laura Ingraham, where Besen admits that he has had sex and “probably would” have sex again with a person infected with AIDS, as long as he wore a condom.

At the time of the broadcast, some liberal social activists had criticized Pope Benedict for his recommendation that Africa concentrate more on abstinence, faithfulness, and partner reduction rather than promote “safe sex” methods such as condom use to curb the spread of HIV/AIDS.

According to research by Harvard University’s Dr. Edward Green, mass condom promotion in some African countries has actually had a reverse effect on HIV/AIDS prevalence, causing increases, not decreases, in HIV infections.

In a letter to The Lancet who criticized the Pope’s stance, Dr. Green said:

“Ecological and epidemiological evidence from generalised epidemics points to partner reduction as the primary behavioural factor explaining declines in HIV prevalence, which we now see in several African countries. Increased condom availability or use has not shown a similar pattern of association with prevalence decline across multiple generalised epidemics.”

To support his statement for the promotion of abstinence, faithfulness, and partner reduction, Dr. Green cites several scientific peer-reviewed studies that provide data to suggest that condom promotion may actually “exacerbate” the AIDS epidemic within Africa.

“The phenomenon of risk compensation—engaging in higher-risk behaviours because risk reduction technology conveys a greater sense of safety than warranted—could account for higher infection rates, and has been suggested by at least one randomized, controlled study, which found that ‘gains in condom use seem to have been offset by increases in the number of sex partners’.”

Green makes a compelling argument; one that I agree with completely. In fact, around the same time Besen opined his dangerous, ignorant views on Fox News, I consulted with Green when citing some of his research in my own work on abstinence and faithfulness with the Children’s AIDS Fund.

But why should we rely on actual data and science when we can trust Wayne Besen’s “safe sex” practices?

When I confronted Besen in Trenton, New Jersey a couple of months ago when we both testified at the same Assembly hearing, he was very defensive and told me that he stands by his statement, that he is now married to his partner, and that both of them are HIV negative.

That’s a relief. But what about all the other potential victims who may have taken Besen’s dangerous and ignorant advice, and as a result, became infected with HIV?

For example, condoms fail 10-20 percent of the time due to breaking during sexual intercourse and other manufacturer’s defects. But the reason they are so risky for the prevention of HIV is because individuals simply don’t use them consistently and correctly, and if someone doesn’t use a condom for every single sex act, 100 percent of the time, it’s like playing Russian roulette.

But perhaps the most troubling aspect of Besen’s statement is that he is a gay man, and the primary audience that listens to and supports him are gay men who have sex with men (MSM).

In fact, the Attorney General has gone on record to say:

It’s really quite astonishing for Besen to talk about credibility when he stated: “The Pope has got a huge credibility problem. It’s not rocket science that condoms stop HIV, just sound science . . . and to say otherwise is reckless, it’s irresponsible, and quite frankly, it’s unconscionable.”

When Raymond Arroyo (Besen’s counterpoint on the show) corrected Besen’s errors, that condoms are NOT the “responsible” and “effective” way to stop HIV/AIDS, and cited actual research that shows Uganda’s abstinence and faithfulness program has been the only success story in Africa in reducing the prevalence of AIDS, Besen resorted to his typical three-year old bullying behavior:

“What you’re saying is not true, every respected medical and mental health organization will disagree with you.”

Wayne’s usual tactic when he loses an argument is to bully those who disagree with him by citing more bullies who also agree with his liberal views. But the fact is, Besen’s statements are extremely dangerous not only to him and his partner, but also to his primary audience of gay men who listen to him and read his blog.

It’s frightening to think that millions of people watched this broadcast, many of whom may have taken his advice, used condoms to prevent HIV during sex, and subsequently got infected.

Voice of the Voiceless is so concerned with Besen’s dangerous advice and lack of education, that we are contacting Fox News Network and all of the other major TV networks that have brought him on as an “expert” to warn them that his dangerous advice may have resulted in countless men (and women) being infected with HIV/AIDS.

If you or someone you know watched this broadcast, followed Wayne Besen’s advice, and subsequently became infected with HIV/AIDS, please contact Christopher Doyle at [email protected] so we can investigate whether Wayne Besen may be legally responsible for your or your loved one’s life-threatening illness.

Christopher Doyle, M.A. is the President and Co-Founder of Voice of the Voiceless, the only anti-defamation league for former homosexuals, individuals with unwanted same-sex attractions, and their families. For more information on our investigation of Wayne Besen, please visit our website at: www.VoiceoftheVoiceless.info