Stephen Black is the president of First Stone Ministries and the author of Freedom Realized. His experience gives valuable insight into the homosexual lifestyle, homosexual counseling ministries, and the “gay Christian” movement 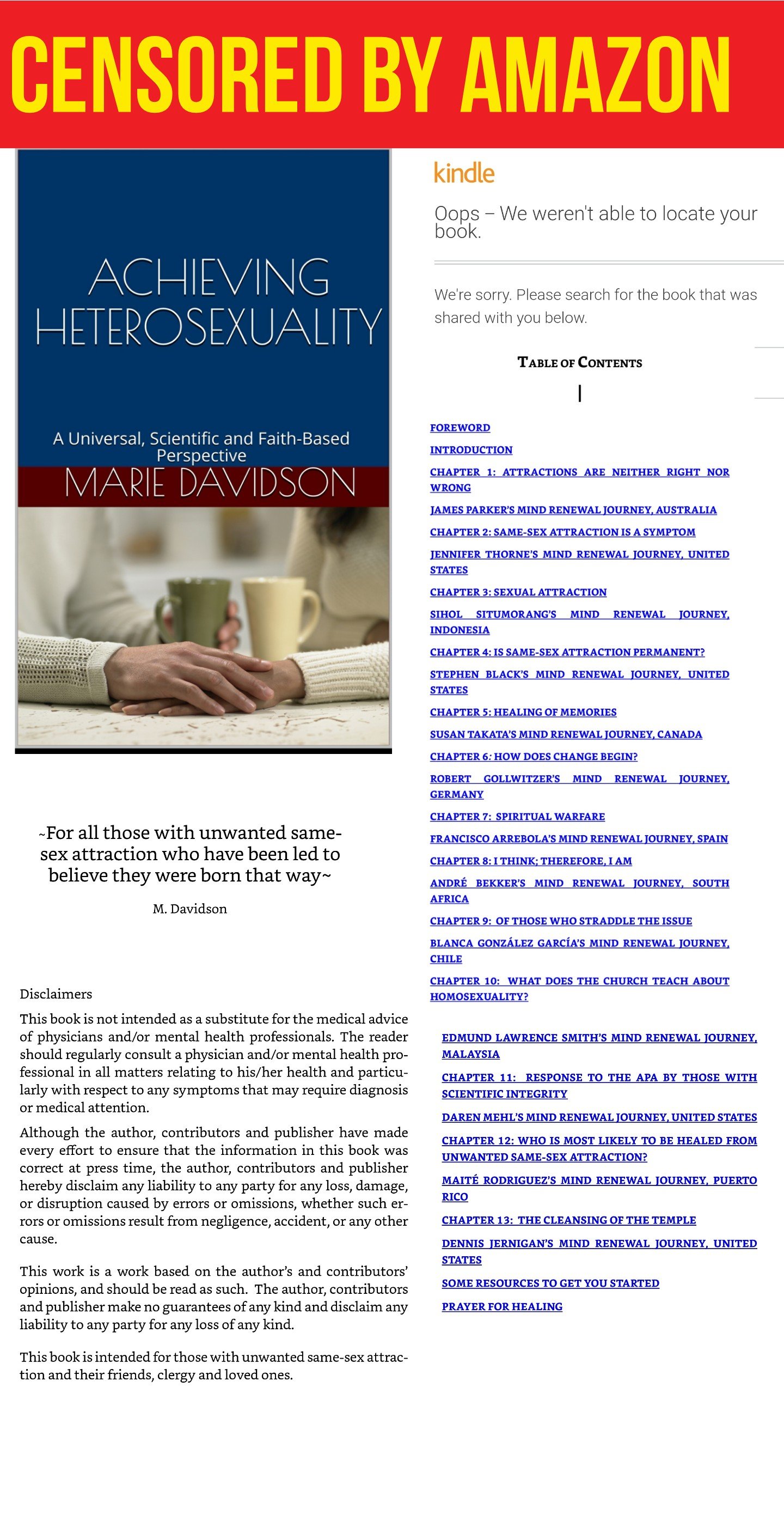 We received information from the author of the book, Achieving Heterosexuality: A Universal, Scientific, and Faith-Based Perspective

The book has been removed from Kindle and Amazon. The notice from Amazon 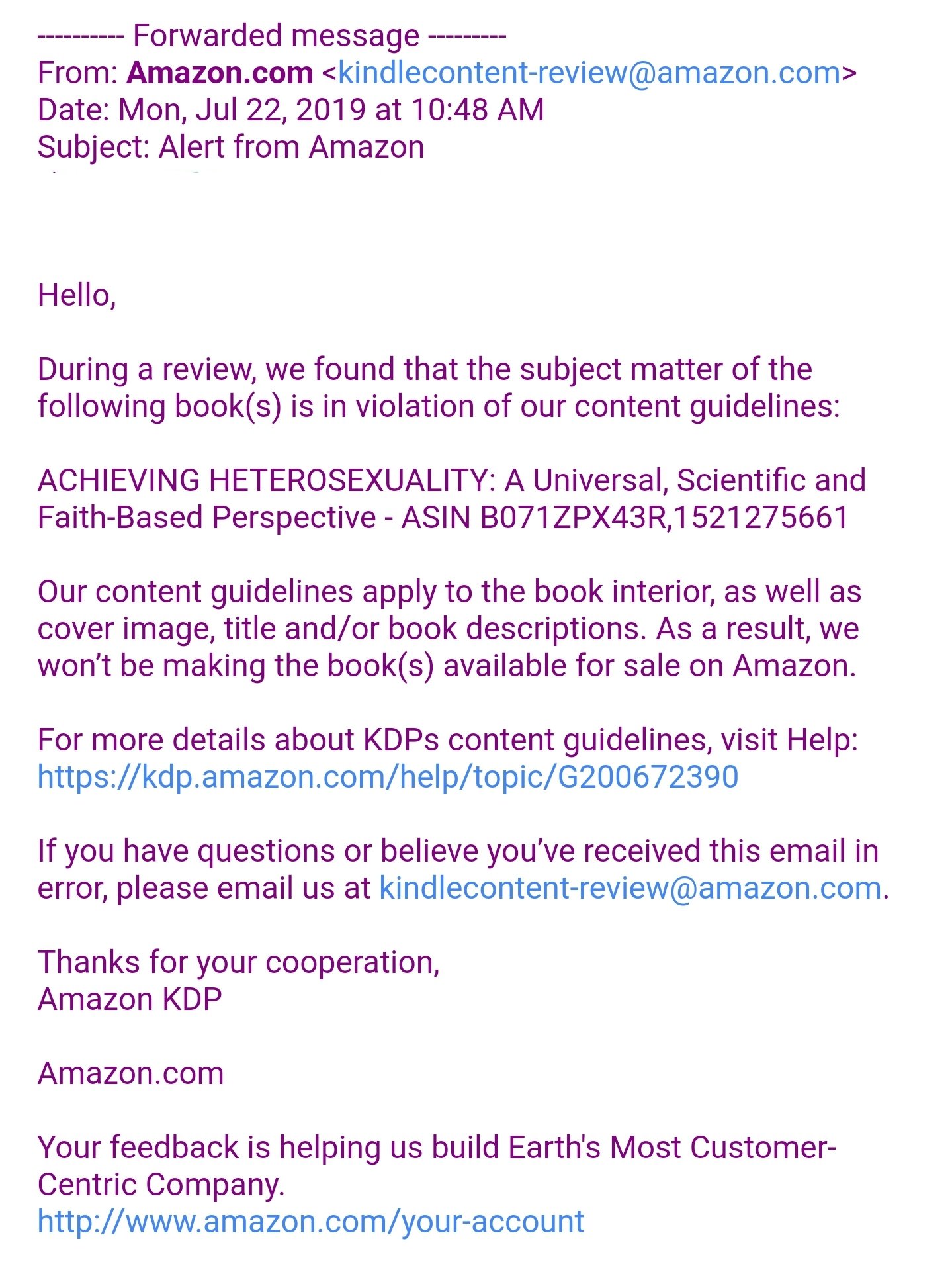 To which the author replied with the following text:

With the prevaricating LGBTQ narrative, it is difficult to understand what is and what is not objectionable. On the one hand, experts such as Dr. Lisa Diamond (APA) definitely state that sexuality is FLUID. This means that sexuality may flow from heterosexuality to homosexuality, BUT it also means that homosexuality can flow to heterosexuality. As a matter of fact, it usually goes from homosexuality to heterosexuality. (Ask Lisa Diamond). If you read the book, Achieving Heterosexuality, you will find that it is the most compassionate of books, offered to those who want to explore the fluidity of their attractions. The book also attests to individuals’ first person testimonials about their journeys, many of which refer to their faith in Jesus Christ. To deem this book as offensive is to deny me my constitutional rights of freedom of religion and freedom of speech.

It sounds to me that Amazon is bowing down to the demands of extreme LGBTQ who deem any idea/belief contrary to theirs as hate speech. When one bows down to the demands (not based on science but on propaganda) and silences free speech, Amazon stands alongside Hitler who controlled what could be read by burning books that mainly told the truth. It wasn’t Hitler’s truth, so those books must have been evil. How can Amazon think they are any different?

In case you want to know why I wrote this book, it is because children are the target of many sexual crimes, and many have developed UNWANTED same sex attraction because of their victimhood. Think about your own son or daughter. If they had been raped (repeatedly) as children by a same-sex adult, would you just tell them that they are gay, like it or not? With legislators “voting” away their right to affirm their heterosexuality through heterosexual affirming therapies, these youngsters are being raped twice. That Amazon would renounce any balanced viewpoint, which, by the way, is based on indisputable fact-check-able data and allow ONLY the views of the LGBTQ is an abuse of power and another crime against these children and young adults.

And we all know what Orwell said about the abuse of power…but, will you still selling his books if we start using what he said against you? Amazon’s action in removing my book and books like mine is just the beginning of a socialist, dictatorship by those in power. By removing these books, Amazon is raping children and young adults again. Without our books, they may never know that change is possible.

I challenge those in authority to read my book, to read the bitter stories of those who lived unhappily in the gay lifestyle, to see the results of therapy that uncovers the wounds of childhood, and to see the journeys of those who did authentically use the mind’s ability to FLUIDLY move towards heterosexuality.

This response was received by Amazon: 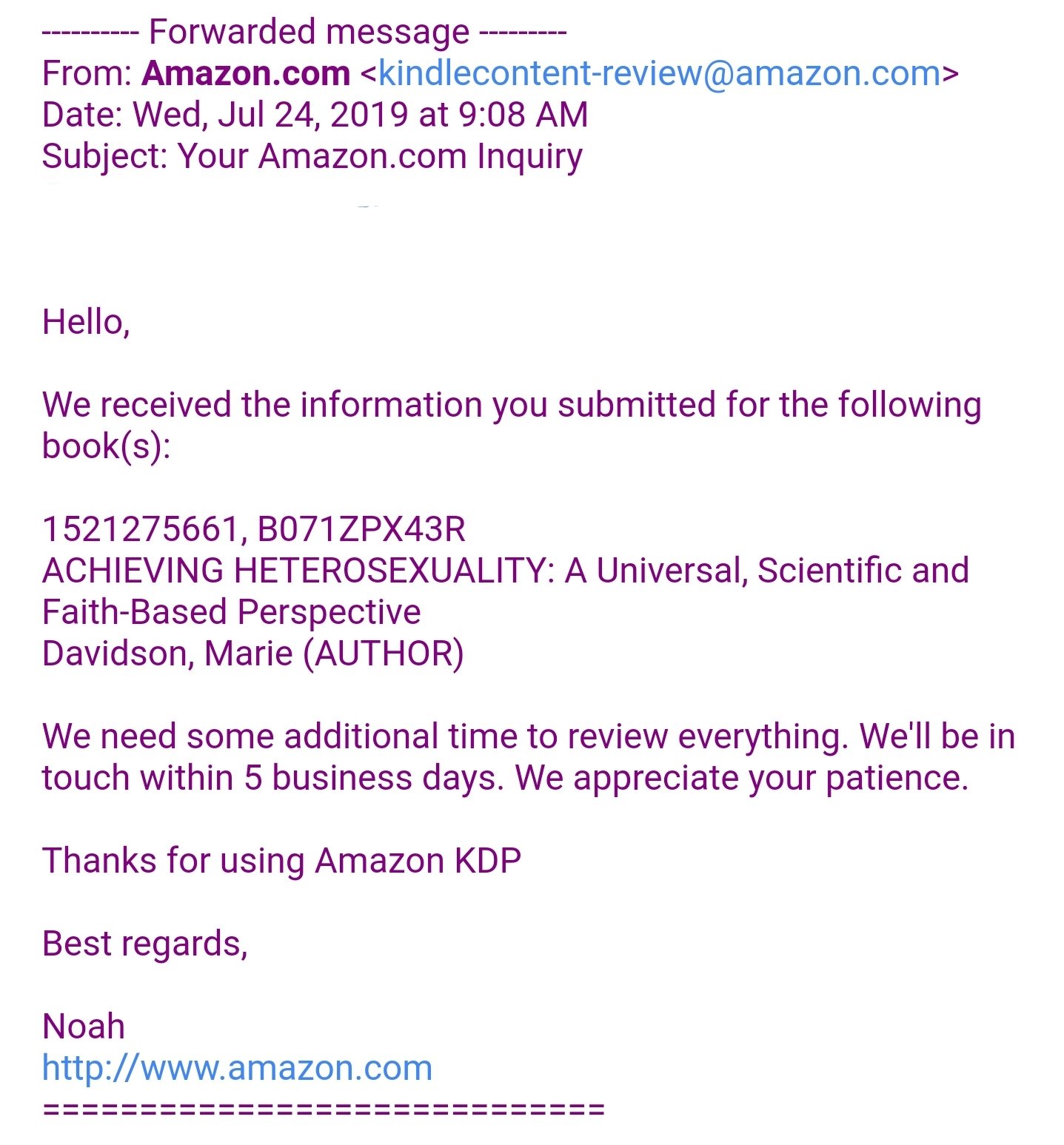 Here are the amendments to the UN’s Urban planning initiatives. Some LGBT initiatives are accepted and some rejected.

We saw some great detailed information on what happened with the SPLC.

Part 1: SPLC gloats over its victory over JONAH