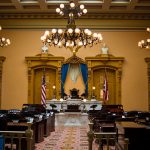 Earlier this week, Ohio became the sixth state to introduce legislation to ban therapy for minors who seek to overcome unwanted same-sex attractions (SSA). S.B. No. 188, sponsored by State Senator Charleta Tavares, would make it illegal for a licensed mental health practitioner in Ohio to help a client under 18 change sexual orientation, but would permit that counselor to affirm a client’s homosexual orientation and/or help a client “transition from one gender to another.”

In an interview with WTVN Columbus, Tavares commented:

“What we’re fearful is that this is going to be more destructive to the young person that somehow they need to change themselves . . . what we’re trying to do is to ensure that we’re not harming young people and making them feel like there’s something wrong with them, that we’re trying to cure a problem so to speak.”

This bill, which is modeled after similar legislation introduced in Washington, Massachusetts, and Pennsylvania, as well as the laws in California and New Jersey, fails to cite any peer-reviewed literature to back up its claims that SOCE for minors is “destructive” to a young person, while at the same time upholding the right of transgender minors to receive counseling on how to change their gender, despite the documented health risks that exist for this population.

In the same Columbus article, I am also quoted:

“There’s no studies and scientists can’t confirm that there’s a simple biological explanation for development of homosexual feelings . . . It’s a direct assault on the freedom of speech, on the freedom of religion, and a self-determination of a family, the parents, and a child.”

The article went onto to quote both of us, saying that:

. . . Tavares says the bill wouldn’t keep parents from taking their children out of state to get the treatment, and claims that in many cases the parents are forcing the child to undergo the therapy. Doyle says that’s a situation he wouldn’t get involved in. He thinks the ban will actually hurt children by forcing them to keep having to deal with unwanted homosexual feelings.

Once again, we see politicians making unsubstantiated claims that parents are forcing their children into therapy against their will, without any legitimate evidence to back this up. We can only hope that rational, levelheaded politicians in Ohio will ask the tough questions that New Jersey and California legislatures failed to do.