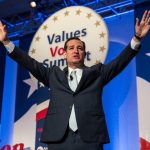 Over 2,200 people attended the eighth annual Values Voter Summit held at the Omni Shoreham Hotel in Washington, D.C. over the weekend. On Friday, an enthusiastic crowd cheered as key Republican lawmakers delivered impassioned speeches in the midst of a government shutdown. Senator Marco Rubio, Representative Michelle Bachmann, Senator Rand Paul, and Senator Ted Cruz, who was the winner of the Presidential Straw Poll, were among the social conservatives who took the stage on day one. Former Director of Pediatric Neurosurgery at John Hopkins University, Dr. Ben Carson, also addressed the Summit. Dr. Carson, whose profile rose last year after making critical remarks about the Affordable Care Act at the National Prayer Breakfast while standing next to President Obama, won the Vice-Presidential Straw Poll.

Sen. Ted Cruz spoke about the need for conservatives to not back down in the face of oppression from the current Obama administration. Cruz, considered by some to be the most disliked politician in America because of his efforts to shut the government down in order to block the new healthcare law from taking effect, was heckled several times by liberal protestors during his speech.

In the afternoon, Rep. Michelle Bachmann continued where Sen. Cruz and Dr. Carson left off, highlighting the Affordable Care Act as one example of the larger loss of freedom at the hands of an oversized, out-of-control government: 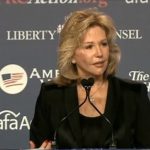 Rios, whose remarks focused largely on the threat of gay activism to our culture, decried the Southern Poverty Law Center’s effort to bully lawmakers not to speak the Summit:

“It is a dangerous time to be a Christian conservative . . . there are threats being made, and we all know a little more than a year ago, Floyd Corkins went into the Family Research Council with the idea that he was going to commit mass murder (due to their listing of FRC a hate group) . . . their main business is attacking and suing conservative organizations.”

Rios went onto discuss the dangers of speaking out against risky homosexual behavior in the public forum and the fact that most Americans don’t hear about ex-gays because of their marginalization from the liberal media:

“We are fighting against a barrage of propaganda, and there is punishment if you dare speak out and say ‘wait a minute, I’m not sure this is right’ . . . the CDC just published evidence to say that 94-95 of new HIV cases among young men are linked to gay sex. The other thing we don’t know is that there is an ex-gay movement. Did you know that September was ex-gay awareness month? They are everywhere and the reason you don’t hear of them is because they are maligned and threatened . . . there are tons of ex-gays with fabulous stories but the American people don’t know about that!”

In a speech titled: “The Red Line of Liberty,” Liberty Counsel’s Mat Staver warned of the government taking away our religious freedom. Referencing the Supreme Court’s recent decision to strike down the Defense of Marriage Act, Staver remarked: 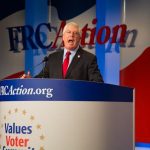 “I suggest to you that the decision by the Supreme Court will find itself in the same dust bin of history as Dred Scott and Buck vs. Bell . . . Martin Luther King Jr. was asked in the 1960’s while he was in jail (for civil disobedience): ‘why do you obey some laws and disobey others?’ He said, ‘it’s obvious because some      laws are just and some laws are unjust . . . when there is a clear conflict between God’s law and the magistrate, then you have no choice, you have a duty, and he said ‘that is why I’m sitting here in this Birmingham jail, I cannot comply.’ There are situations that we are facing today that I believe crosses that red line, it is Obamacare forcing religious and moral employers to fund abortion. That is a line we cannot cross. When they force a photographer in New Mexico to choose between their profession as a wedding photographer or choosing to violate that belief by photographing same-sex marriages, or when they force the Catholic Charities in the commonwealth of Massachusetts to execute their religious beliefs and put orphans and children in same-sex households, that is a red line we cannot cross either. We cannot sacrifice our religious freedom!”

As day two of the conference progressed, speakers focused more on family values and the necessity to invest our priorities on being aware and getting involved in politics and electing conservative leaders into office. JimBob Duggar, whose family stars in the TLC show “19 Kids and Counting” spoke of his experiences serving two terms in the Arkansas state house of representatives and following God’s call for him to run for U.S. Senate.

JimBob Duggar and the Duggar Family, stars of the TLC Reality Show “19 Kids and Counting” Performed Vocal and String Selections

“Every person in this room can either run for political office or can easily support someone who runs for office . . . you need to get involved . . . when I ran for U.S. Senate, I was outspent $2 million to $100,000 and I only won about 22 percent of the vote. But out of that tough experience came a tremendous opportunity. A New York Times article reported that a man running for Arkansas Senate with thirteen children lost. But not long after, I was approached by a parenting magazine that wanted to do a story on our family, and Michelle agreed. After that article appeared, TLC approached us wanting to film a documentary on lives.”

Radio and TV personality Glenn Beck highlighted Saturday afternoon with a passionate speech, focusing on family values and individual responsibility. “It’s not hard to fix our world, because we are each broken.” Beck decried the lack of focus in Washington and forward thinking:

“The problem with the Republicans is there’s no vision . . . we are finally standing up and saying this is what we believe! But we might lose? Yes, but we might just win?” 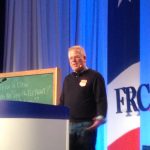 Beck also spoke of his own family’s struggle to connect, and how he came to the decision that no one in his house would ever play another video game again. Instead, they would focus more on each other, their values, and faith.

“One day my son said, ‘Dad, let’s make a fort. I got excited, and said ‘yeah’ let’s go check out the barn and see what kind of materials we have. Then he said, ‘no dad, it’s so much better on the computer’.”

That’s when Beck decided to make a rule that no one in the house was to ever play another video game, and instead, get back to the basics. “The only time we could figure out that we would all be together was dinner, so that’s when we would bring our scriptures and read together.” He concluded his remarks with a strong plea to all those in attendance by telling a story of how he held onto the only compass George Washington ever used, during a very tough day in his life. He pleaded with the audience to follow Washington’s example: “Stay true to your principles and chart your course carefully!”

To watch any of the speeches from the 8th Annual Values Voters Summit, click here.