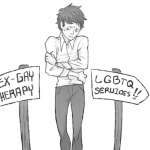 Earlier this week, George Mason University’s (GMU) official student newspaper, Fourth Estate, reported on the discrimination happening at their LGBTQ Resource Center. “During his experience at Mason’s LGBTQ resource center, Doyle said he witnessed discrimination in these centers that he thinks has been going on at college campuses across Virginia. Doyle also said he received medically inaccurate advice and biased counseling.”

“We don’t give students advice, we give options, and I did that with him. As soon as someone asks me for information about these groups, I tell them we have the information and if they would like some, I’ll get that for them. He (Doyle) and I sat in the office and I turned and I pulled the file drawer out and I have them sitting in my file drawer.”

You can listen to the audio recordings of Chollar’s “options” by clicking here. What Chollar stressed was that ex-gay therapy was harmful, and a better choice would be to attend a gay-affirming place of worship such as the Metropolitan Community Church, accept one’s homosexual feelings, and read a book called “The Lord is my Shepherd and He Know’s I’m Gay.” Click here to listen to the audio recording.

In the interview with Fourth Estate, Chollar went onto say:

“What groups like his are asking, in fact demanding, is that written information like brochures be displayed publicly. I will admit that is not what we do. However he also says that he had to aggressively ask over and over again. That is just not my memory at all. He would have had a different reception with me if from the very beginning he said he didn’t want to [be gay]. He presented as neutral and unknowing and that he was experiencing these feelings and he didn’t know what to do about them.” 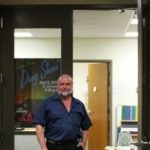 Rose Pascarell, the vice president of University Life at GMU, said that “Chollar handled the situation in the gentlest way possible, performing his duties as a licensed clinical social worker by explaining his concerns with reparative therapy.” According to Pascarell, prominently displaying the ex-gay resources would interfere with the goal of providing students support and would be giving them information that mainstream associations have said can be harmful to an individual.

But providing students support is exactly what the university is failing to do by limiting the LGBTQ Resource Center to only one viewpoint on homosexuality. In fact, one of the brochures that Parents and Friends of Ex-Gays and Gays (PFOX) gave GMU to display was a set of brochures on tolerance for the ex-gay community, and none of the brochures were actually about therapy.

“While the LGBTQ Resource Center educates the entire university on gay issues with its activities, events, and messaging, they are, at the same time, discriminating and marginalizing students who experience unwanted same-sex attraction and may want to seek change,” commented Estella Salvatore, President of PFOX. “Therefore, the focus should be on diversity and tolerance for formal homosexuals (and students with unwanted SSA), because the center was founded for tolerance and diversity on sexual orientation.”

The larger issue here is the inherent bias against those whose faith and values guide them not to act on homosexual urges, but rather, encourage them to explore the origins of those feelings and seek change.

“At the very heart of this issue is discrimination and bias towards those who do not believe in the so-called mainstream view that people are born gay,” commented Doyle. “The GMU officials are justifying their discrimination based on the so-called prevailing attitude, yet they will fight against the prevailing attitude on other issues as long as it suits their political agenda.”

By claiming that “mainstream associations” are against therapies to change, GMU fails to acknowledge organizations like the American Association of Christian Counselors and the National Association of Research and Therapy of Homosexuality, both of whom support the rights of counselors to assist a person who does not want to act on homosexual feelings and seek change. Collectively, these two organizations represent tens of thousands of licensed mental health professionals.

“Public funded universities are supposed to be a place where students are given equal access and neutral information so they can live their lives according to their own values. But at George Mason University, apparently the only ‘option’ a student with same-sex attractions has is to live a gay life. The actions of GMU are illegal and constitute viewpoint discrimination. If they refuse to make reforms, they are opening themselves up to a lawsuit.”