July 18th, 2013 marked a historic era in the history of the United Kingdom, indeed, in the history of the world. With a royal seal of approval given by Queen Elizabeth II, homosexual marriage has become the law of the English land. Parliament has passed a sweeping national law that allows homosexual men and women to marry members of their own sex.

In the last 50 years since Gay activism became active, there has been one principle, one idea activists have sought to institutionalize the world over. The idea is that homosexuality is inborn in human beings by nature, and as such, is unchangeable. Without the acceptance of this idea, Kings and Queens, Presidents and Prime Ministers, Congresses and churches would never have begun to succeed in passing laws to allow same-sex marriage.

The highly respected and venerable Queen Elizabeth II has apparently conveyed her own belief in the “born-that-way” principle. With her seal of approval, she has indeed entered into a Britannic blunder, the like of which has never been seen over the last 15 English centuries. The land of Shakespeare and The Bible, this emerald of the sea, this blessed plot, this England, the second most historically influential country in western civilization, has become a harbinger of the certainty of the times to come. 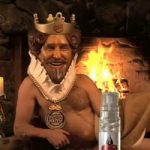 The next unarguable step, certain to occur someday very soon, will be the crowning of a Gay British King. He and his, well “King,” will become the royal couple occupying Westminster Castle. If the royal birth of the baby, Prince George, happens to be Gay ,then Queen Elizabeth will, by her own belief system, be obligated to welcome her great-grandchild into the castle, nay, welcome him/her with open arms and prepare for the eventual reign of a Gay monarch and their spouse. This modern royal couple will no doubt attempt to have children in some way. Who knows, maybe by then gender and sexuality will be of no concern whatsoever, and the freedom for men to physically have their own babies might be medically possible?

What a brave new world we are entering as Elizabeth inches nearer her exit from this world. However, when the queen is gone she will not have to worry about the issue, which is typical of 20th century British monarchs who often avoid controversy. She will be gone, and her legacy will take root and flourish. Certainly, a “brave, new world.”

Of course, in the past there were some English Kings who were certainly involved in homosexual relationships. But this is a far different circumstance than a British monarch fully accepting their heirs as future monarchs with their “wife” or  “husband” by their side. Can you imagine the royal tours across the world with the presentation of a Gay King and his spouse? Think it won’t happen? Readers, it must happen, if being Gay is naturally inborn and immutable.

The land of Shakespeare indeed…”What fools these mortals be.”