WARNING: This is NOT Your Usual Road Trip

In the first five days of Doug McIntyre’s 10 Day Road Trip to Washington, DC, he has encountered both angels and demons. In a phone interview yesterday, McIntyre told Voice of the Voiceless about some of his experiences so far.

“When I got into Dallas, I found an evening service to attend and it just happened to be a gay-affirming church. The pastor of the church must have saw my truck and assumed I was another anti-gay bigot, and condemned me three times during the service. So much for tolerance! He and Wayne Besen should really get together and write some more lies about me…heck, maybe MSNBC will bring them on! Networks such as MSNBC that use unreliable sources such as Besen need to reevaluate their policies for securing ethical and truthful commentators. Besen’s Truth Wins Out hate group is one of the biggest sources of lies available to the LGBT community, and it only adds more hatred towards former homosexuals. I wouldn’t be surprised if this pastor was ill-informed from the likes of Besen.”

Early this week, Dr. McIntyre rolled into Atlanta to meet with DL Foster and the Overcomer’s Network, and was shocked by the kindness of a complete stranger when he got into Georgia. “I was in a parking lot and a man introduced himself to me and then asked me to come to his shop in a couple of hours. When I arrived, he had designed two t-shirts for me for free and told me how great he tho 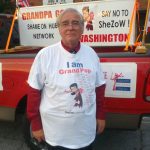 ught my tour was and said he wanted to bless me! I have had amazing experiences like this every day. In every city I stop, I am encountering compassionate, God-fearing people who are just as outraged as me and concerned for their children and grand children.”

On Wednesday, Dr. McIntyre had a meeting with some former homosexuals in Charlotte, NC. “They shared their stories and told me about some of difficult experiences they have come out of,  and I offered them support and advice as they continued their journeys. They were all very much in support of what (we) are doing. These folks are an inspiration – they are so brave to not follow what the world says you should do, but are listening to their own consciences and taking a different path.”

To read more about his 10 Day Tour, read the LifeSiteNews article here or The Christian Post article here.

Voice of the Voiceless is the only anti-defamation league for former homosexuals, individuals with unwanted same-sex attractions, and their families. For more information, visit: www.VoiceoftheVoiceless.info.