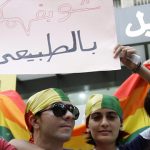 Being a survivor of the Middle East thirty years’ plus war, and a resident of the country of Lebanon with its intriguing combination of interesting colonial history, political unrest, and armed conflict, I can say I very well know what the word “terrorism” means. That said, never in my thunderous life had I encountered anything more horrific than the Ex-Gay-phobic LGBT-secular-extremists “guerrillas.”

They are brainwashed with deception, fooling everyone while claiming victim hood to gain acceptance, tolerance, justice, equality, marriage, adoption, and “sexual freedom,” while violently and unfairly hindering their ex-gay peers who seek the same tolerance but are rarely afforded it. Who knows when would their demands ever halt, maybe not before starting to command the legalisation of pedophilia, as we are now seeing.

Liberal Americans and elite Europeans are tricked by them just like the Arab world had been fooled with democracy and peace, while all that exists is submission and unrest. They erroneously think they are helping the LGBT community by defending their destructive rights and banning therapy for those who seek change, when the truth is they are hurting them so awfully, severely, gravely and ignorantly by encouraging a path that would only lead to more depression, addiction, disease, instability, and suicide. Do you really wish such drastic ending to your own children? In case you answer no, then: STOP BEING NAIVE.

Arab Ex-Gays are really “The Gayest” and “The Happiest” amongst all the people struggling with same-sex attractions around the world. They are Christians and Muslims who have a special relationship with One Person in common: “The Virgin Mary.”  They have a distinctive devotion to Her and She makes Herself Visible to them. Do not misunderstand me; She is NOT their Healer but Her Son Is. And just like She Told Him in Cana: “They have no wine,” He would never refuse anything She asks of Him. But first, we must do what He Commands us to do: “Thou shalt love the Lord thy God with all thy heart, and with all thy soul, and with all thy strength, and with all thy mind; and thy neighbour as thyself.

What is love? Love can never be degraded and desecrated to mean just an emotion or mere thrilling feelings. In order to love someone with all your heart, soul, strength and mind, you will need to know what is in your own heart, soul, mind, and also how much strength you have. You get to know yourself, see what is lacking, be aware of your own shortfalls and understand the roots of those deficits. Specialized SSA Psychotherapy and Religious Informed Spiritual Direction are the most helpful methods when used in correlation. Understanding yourself is necessary before you can develop morality, wisdom and discretion. But who needs those virtues and values these days when nobody dares to even speak about them anymore unless they are risking being named traditional, conservative, outdated, and old-fashioned? Those who are silent about social moral degradation or decide to take the decadent side are miserable cowards heading for destruction of not only themselves but of their children and grandchildren!

Arab Ex-Gays are acknowledged with honor and esteem and are looked very high upon within their society. People do not cease to show them admire for the progress, perseverance, strength, and growth they show where many else would fail. One of the many hints for their orientation change is that they start their healing journey and take therapeutic measures at an early age. In contrast, we are now seeing this therapy being foolishly banned for minors in the USA, as if politicians and lawmakers are scientists and know what’s best for youth. In reality, these politicians do not care about youth, but are only advancing their own political objectives.

I thank you God for being born in Lebanon, the only country in the world where laws, regulations, decrees and acts will forever remain moral no matter how hard the western agenda tries to infiltrate it with their evil influences.

Carol Aoun is the Foundress and President of “Mary Help of Mothers,” a Lebanese pro-life non-profit organization that was founded in 2009. As the only pro-life organization of its kind in the Arab world, Carol has been counseling women, facilitating retreats, and helping post-abortion women in their families recover and heal wounds. She also spreads awareness by actively working within the media to educate the public in television documentaries.