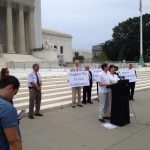 July 31, 2013 was a great day for former homosexuals in America! While the turnout was humble, the enthusiasm among those who participated in Ex-Gay Pride was immeasurable. Anti-ex-gay extremists are gleeful that “less than ten people showed up”…actually, by my count, nine former homosexuals (including an ex-transgender) and a half-dozen more allies came out to lobby Congress and show support at the press conference in front of the Supreme Court. While that number may be small, we have to start somewhere.

But let’s imagine double that number showed up, or maybe 50, or perhaps even 100. Would that be enough? For anti-ex-gay extremists, it would not. In my view, it is significant in our current anti-ex-gay climate that even ONE former homosexual is willing to share their experience and speak out publicly. So why do activists make such a big deal over the numbers? The reason is because they want to make it seem like the only ex-gays who are vocal are a small group of profiteers that are fooling vulnerable individuals; in essence, they claim we are liars and charlatans that are misleading others.

But what they do not realize is that it only takes ONE ex-gay that has changed to put a wrench in the “born that way, cannot change” strategy they are using to deceive the public. The fact is, these activists cannot handle the existence of ONE person who says they have experienced change from same-sex attraction to opposite sex attraction, much less nine of us telling our stories at one time. So they need to mock, belittle, and downplay the significance of yesterday’s events. That is why there is so much anger. So much intimidation. So much disrespect. So much harassment.

As I commented in The Christian Post yesterday, the former homosexuals who speak out are heroes. They are subject to harassment, discrimination, marginalization, and defamation simply because they have pursued a path that not many others in their circumstances would have done – a road less traveled, so to speak. Unfortunately, not many people are celebrating their life and achievements. But they are heroes, and we should celebrate their lives and stories.

One of those heroes is Robin Goodspeed, an ex-lesbian who for the first time yesterday spoke publicly about leaving homosexuality. A resident of Wyoming, Robin does not run an ex-gay ministry, nor is she a therapist or political activist. In other words, she has nothing to gain by telling her story except the satisfaction of being true to herself. I got a chance to speak with her for a few minutes, and I believe she is a courageous woman who has defied all odds, despite a lack of support from the “tolerant” LGBT community in Oregon (where she previously lived) and Wyoming, who refuses to accept her experience and support her choice.

Yesterday, Robin felt at home with other like-minded ex-gays, and was able to Come Out Straight for the first time publicly and talk about her experiences as a lesbian, and now as an ex-gay pursuing heterosexuality. I was touched and inspired by her bravery! But for every Robin Goodspeed that tells her story, there is a thousand others who remain silent because of fear, intimidation, and shame. They remain in the closet and suffer in silence. My hope is that these individuals come to understand that there is a supportive, loving community who embraces them and that they need not fear rejection for speaking their truth.

There were many other highlights at yesterday’s events. Dozens of Congressional offices, Congressmen/women, and Senators were introduced to former homosexuals, possibly for the first time. We got the chance to educate lawmakers on the struggles that we as a group of people face. We also had a chance to speak to dozens of people who walked by the Supreme Court and stopped for a few minutes to hear our stories. This is very important, because it’s not likely that these folks would ever hear such accounts in the mainstream media, who regularly shuts us out and refuses to air our stories. 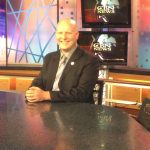 Christopher Doyle at the Washington, DC studio of the Christian Broadcasting Network.

Speaking of the mainstream media, they predictably failed to show up, despite being sent multiple press releases. But the Christian Broadcasting Network (CBN) did show up, and they were gracious enough to invite me to share about Ex-Gay Pride during their 4:00pm Newswatch program on July 31. You can view it here.

Christopher Doyle is the President and Co-Founder of Voice of the Voiceless, the only anti-defamation league for former homosexuals, individuals with unwanted same-sex attractions, and their families. For more information, visit: www.VoiceoftheVoiceless.info.