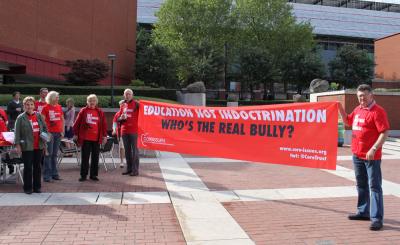 Called “Conversion Therapy Consensus Statement” this document, on behalf of the Department of Health, claims to provide those seeking therapy, those seeking to offer therapy, and those seeking to refer people for therapy the best advice on what to do when someone has unwanted homosexual feelings. I emphasize the word claim as this is what it fails to do. In fact the document does the complete opposite. Not only does it fail to provide any proper scientific basis for its claims it deliberately misleads the reader as to what science does say by ignoring the research out there. In doing so the various mental health bodies willing put the mental health of potential clients at risk.

Everyone of the professional bodies behind the document have been asked to provide the following:

2. Any testimony based study that uses a recognized measure of psychological harm that shows sexual orientation change efforts to be either harmful or ineffective

3. Any independent testimony based study that shows sexual orientation change efforts to be either harmful or ineffective, by independent I mean that it was not sponsored by a homosexual rights lobby group and that it did not recruit participants through advertising for those with a specific answer.

4. Any study, either longitudinal or testimony based, that shows therapy to help someone accept their homosexual feelings to be effective or that it does not cause harm.

As yet all the bodies have failed to provide such evidence whether to me, or to bodies such as CORE Issues or Christian Concern. Why? Because there is none!

The UKCP, the main authors of the document, rely heavily on a 2002 paper by Drecher, Shidlo and Schroeder. The problem this is that this paper is not actually research. It is a rehash of opinion pieces by the authors with reference to the notorious research by Shidlo and Schroeder. For those who may not be aware of this original research, Shidlo and Schroeder were recruited and paid by the National Gay and Lesbian Heath Association to undertake research to prove that sexual orientation change efforts were dangerous. This research was advertised in the media using the following advert.

The National Lesbian & Gay Health Association is sponsoring an investigation of the outcomes of so-called treatments of the so-called disorder of homosexuality. Here’s their press release:

Did you know that counselors, psychologists and psychiatrists still attempt to treat **homosexuality** as a **disorder**

Did you know that currently there is an organized association of psychologists/psychiatrists who meet yearly to develop new **”conversion treatments”** for homosexuality?

Did you know that countless “gay recovery” programs exist through the United States, yet these programs refuse to publish their data on treatment outcomes?

We are currently attempting to research the outcomes of these so-called treatments of the so-called disorder of homosexuality. Our purpose is to document the damage which we believe occurs when a gay or lesbian client encounters “psychological help” from a homophobic treatment program or provider. Despite the American Psychological Association and American Psychiatric Association’s stance that homosexuality is *not* a disorder, there continue to be professionals and organizations who foster the belief that homosexuality is a learned and reparable emotional illness.

You can help make this research possible. If you know of any individuals who have experienced such a program and are willing to talk about it anonymously and confidentially, please refer them to our project. We can interview them either in person or by telephone.

You can be of help in the long process of getting the message out that these “conversion” therapies don’t work and do the opposite of healing *by informing your lesbian/gay/bi communities of our search for participants to be interviewed.* Please announce our project in any upcoming lesbian and gay community meetings and spread the word. **Help Us Document the Damage!** — Drs. Michael Schroeder & Ariel Shidlo, Co-Researchers, 412 6th Ave., Suite 602, New York, NY 10011, 212-353-2558, [email protected]

Despite this willful bias the various professional bodies are willing to use this as the basis for their document – even though the original paper states that it should not be used as evidence to prevent people entering SOCE! So not only are the UKCP et al. basing their “ethics” on bad research, they are ignoring the caveat of the researchers. They are then using this pseudo-ethical position to dictate the policies of the UK government’s policy on who can and cannot be a “therapist”. This is before we point out the misquoting of the American Psychological Association’s “report” on sexual orientation change efforts (a report written by a group of authors chosen because they were already anti-SOCE).