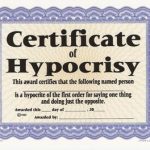 Sooner or later, true hypocrisy shows its true hand. In his latest article, “Truth Wins Out Condemns Providence College For Rescinding Speaking Invitation for Marriage Equality Proponent,” Wayne “It’s ok to have sex with AIDS-infected partners” Besen demands that Providence College reinstate gay marriage activist Dr. John Corvino to speak about the benefits of Gay Marriage at a student event this weekend at the college.

Read the article. The evidence of Besen’s true character and mission is revealed in the first few paragraphs, especially when compared with all his earlier articles and actions concerning sexual orientation change therapies.

In the article according to Besen:

The abrupt and impolite cancellation (Dr. Corvino’s speech) was announced by the college’s provost on Saturday, depriving the students of the very type of open debate that leading  universities are supposed to foster.

Besen speaks for open debate on these issues? Highly trained and licensed therapists who conduct successful reparative therapies have asked for years to participate in the open and fair debate of these issues to institutions of higher education, the American Psychological Association, the American Psychiatric Association, and encouraged Besen himself to discuss or publish a good faith effort to present both sides of sexuality and change issues.

For years, in article after article, in speech after speech, Besen has incessantly attempted to insure the exact opposite of open and free speech. Peruse his website and you will see his only mission is to destroy any opinion, and any person, that is not congruent with his Gay ideology. He has also used defamatory, caustic and unprofessional language toward people for years who sincerely disagree with his philosophy.

Besen opposes hate, but uses hate speech, lies, misleading information, and information cover-ups in an effort to force all people to believe in Gay ideology. He never allows other viewpoints to be fully debated or expressed fairly on his own website, nor does he ever allow anyone, if he can help it, to express alternative views in any of his efforts with other institutions or the media. And now he asks for an open debate?

We have always stated publicly that we recognize the right of all individuals to express their views on sexuality. We have always welcomed the voice of Gay persons to speak about what they believe. However, we have never been given the same unbiased treatment by Besen or by the health organizations mentioned above.

Indeed, Besen has shown his true hand, his true mindset…to force his agenda onto everyone no matter what biased and dishonorable methods will get the job done.

We are still interested in free speech for all. We sincerely ask Mr. Besen to open a forum or an event to give honest evaluation to both sides of these sexuality issues. We stand ready at any time to insure he or his colleagues have a voice through fair play.

The cards are indeed on the table. Let all hands be played.