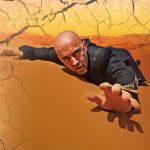 Since 1973, many Americans have felt lost, isolated and scorned as they looked for some kind of direction to deal with their unwanted same sex attractions. In late 1973, the board of trustees of the American Psychiatric Association (APA) voted to drop homosexuality, per se, as a mental disorder. Ten board members, who voted 6-4, decided to simply obliterate its century old psychological definition by a consensus agreement. This has left those with unwanted same-sex attraction to aimlessly look for direction to find their true selves. The APA’s tragic decision has left many with unwanted SSA alone in the desert for 40 years.

To make matters worse, for decades, many heterosexuals have scorned, humiliated, and shunned homosexuals. Instead of helping them out of the desert, they built up walls to keep them there. Not finding love, affirmation, and acceptance from heterosexuals, many with unwanted SSA decided to stop their isolated suffering. These men and women only wanted what everyone else wanted: to belong, to be accepted, and to be loved. The Gay Movement was born out of these simple, psychological, and emotional needs. The gay movement defended, fought for, and won over the hearts of many homosexuals, their parents, and their friends.

Is it any wonder then that homosexuals have built up walls to keep any non-gay affirming information away? Today’s homosexuals do not even want to hear about 21st century strides in understanding the causes and the resolution for same sex attraction (all of which, by the way, deal with issues that a specialized, trained, licensed clinical therapist could facilitate had the APA’s 6-4 ruling been allowed to be scientifically challenged, disproven and overruled.)

Most gays I’ve talked to are unaware of the latest discoveries about gender identity development, the healing of memories, the healing of post-traumatic stress disorder, and the remarkable ability of the brain to reorder pathways. They are unaware of twin studies which literally disprove any “Born Gay” theory. They are also unaware that they were not affirmed in their gender identity, perhaps since they were 18 months old. They are completely unaware of the thousands of authentic success stories of reoriented men and women.

What we need is a loving voice to reach those is the desert, to welcome them back, and to offer them wholeness. We need a new Moses.

1 thought on “Out of the Desert”