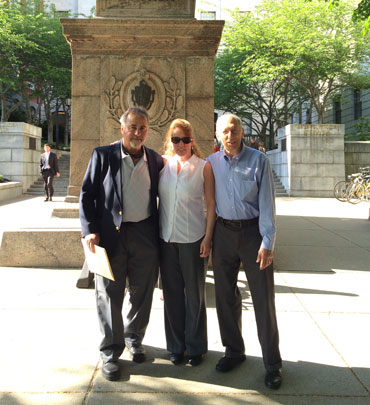 Concerned citizens in Massachusetts lobby against the Change Therapy Bill in May.

Today, MassResistance published a through report of the recent lobbying efforts from a number of ex-gays and concerned citizens in Massachusetts to fight H3907, which would ban counseling for minors who seek to overcome unwanted same-sex attractions. Having worked with the folks at MassResistance and their volunteers, it is exciting to hear just how much of an impact the assistance Voice of the Voiceless, Equality And Justice For All, and PFOX has had in helping them stall this bill and reroute it into the Ways and Means Committee, which we anticipate will ultimately lead to its death. Below is portion of the report from MassResistance:

The parents and ex-gays who lobbied met with key legislators, saying the following:

They described in detail the horrific problems this ban would cause to innocent, vulnerable youth — many of whom were had been molested or experienced some sort of sexual trauma — who need professional help to heal and properly cope. Children and teenagers who desperately want and need counseling would be denied it if the homosexual activists’ bill were to become law.

The MassResistance group came heavily armed with solid information, including materials from the national ex-gay groups PFOX (Parents and Friends of Ex-Gays and Gays) and Equality and Justice for All. In particular, Christopher Doyle, president of the ex-gay group Voice of the Voiceless, was most valuable in supplying material.

The report then went onto to discuss the recent history of these bills:

At first it was very effective. The first two bills sailed through the California legislature, and then the New Jersey legislature, and got signed by both governors. That took everyone by surprise, and pro-family people were stunned and outraged.

But then things started to turn around. Helped by prominent ex-gay movement leaders, including activists such as Christopher Doyle and others, local pro-family groups began to get informed and fight back effectively. And it’s worked. Despite the overwhelming resources the homosexual lobby has used to push these bills, after California and New Jersey everything has changed.

The LGBT lobby was unprepared for the diversity of people ultimately turned off by these bills. Despite the very emotional , deceptive, misleading and outright false arguments being used, once people find out what the bills really do they are very unpopular across a broad political spectrum. Many legislators who normally vote liberal and “pro-gay” back off this one, especially once they see how unfair, “anti-choice”, and unscientific the bills are.

As of now, here’s the rest of the tally. These are some of the untold recent victories of the pro-family movement:Rejected by state legislatures in 8 states: Virginia, Maryland, Washington, Minnesota, Illinois, Hawaii, Wisconsin, and Rhode Island.

On a path to be rejected in 5 states and DC: Pennsylvania, Ohio, Florida, New York, District of Columbia, and Massachusetts.

Up in the air: Vermont.

Christopher Doyle is the President of Voice of the Voiceless, the only anti-defamation league for former homosexuals, individuals with unwanted same-sex attractions, and their families. For more information, visit: www.VoiceoftheVoiceless.info