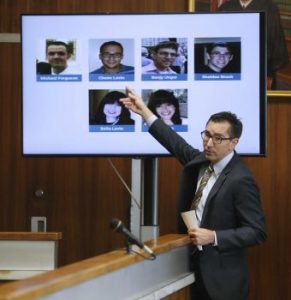 Goldberg is the lead defendant in the suit brought by four young men who came to him for help with unwanted same-sex attraction. They accuse Goldberg of defrauding them by promising success in fighting their temptations.

In court today, plaintiff witnesses continued to get tripped up in cross-examination in what could turn out to be a four-week trial in Hudson County Superior Court.

Jo Bruck, one of the defendant’s mothers, and who is also party to the suit, testified that Goldberg promised to change her son Sheldon from gay to straight. But she had to admit under cross-examination by Limandri that Goldberg had never made such a promise.

She testified that she had only “skimmed” the client services agreement, but under Limandri’s cross Bruck admitted she had read agreement and it was shown she even initialed a number of paragraphs. This is important to JONAH”s defense because it shows that many of the plaintiff’s claims are false. For instance, they charge that Goldberg guaranteed success in ending their sons’ same-sex attraction, but the agreement they signed made clear that JONAH offered no guarantees whatsoever.

Chaim Levin testified this afternoon that he objected to a number of treatments he received in his effort to stop having sex with men. He said a weekend retreat included other men acting out Levin’s childhood molestation at the hands of a cousin. There were also sessions in the nude that he says he objected to, though under cross-examination he admitted to writing emails saying he was thrilled with the weekends and the treatment he was receiving.

According to Goldberg, Levin was so enamored with JONAH and the treatment he was receiving that he asked to become a public spokesman for JONAH and also to raise funds for the group. Goldberg said at the time he made the request Levin was not far enough along in his treatment to take such a role.

Testimony got momentarily strange this morning when it was brought out that during depositions last year Levin’s mother Bella had charged either Arthur Goldberg or Alan Dowling, Levin’s main therapist, with molesting her son. Not even plaintiff’s lawyers took the charge seriously.

One thing is abundantly clear in this case. The young men suing JONAH led remarkably sheltered lives. They grew up in the very conservative Orthodox communities in Brooklyn where they went through the Yeshiva school system and had virtually no contact outside their small world. Levin said growing up he had never seen television or movies. This article was originally published at Breitbart.com