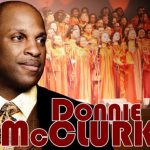 It’s a sad day in America when a Grammy Award winning Gospel singer, who is African-American, gets uninvited to perform at a civil rights celebration honoring the legacy of Martin Luther King, Jr. because it would “offend” gay activists.

But that’s exactly what has happened. Gay activists have successfully hijacked the civil rights movement in America, and last Saturday, held the city of Washington, D.C. and its Mayor Vincent Gray hostage unless ex-gay Donnie McClurklin was uninvited.

McClurkin was scheduled to headline the concert to celebrate the 50th anniversary of the March on Washington. But gay activists objected because of his public statements opposing homosexuality and ex-gay testimony of being molested by male relatives as a child, living a gay life, and then coming out of homosexuality. “I’ve been through this and have experienced God’s power to change my lifestyle,” he wrote. “I am delivered and I know God can deliver others, too,” commented McClurkin in a 2002 online testimony.

Because of McClurkin’s ex-gay testimony and politically-incorrect views on homosexuality, he was labeled divisive and hateful by gay activists, who urged the Mayor to eliminate him from the D.C.-government-sponsored concert at the Martin Luther King Jr. Memorial titled: “Reflections on Peace: From Gandhi to King.” Mayor Gray asked McClurkin to withdraw from the event, saying: “The Arts and Humanities Commission and Donnie McClurkin’s management decided that it would be best for him to withdraw because the purpose of the event is to bring people together.”

But according to McClurkin’s video statement posted online Saturday, it was not a mutual decision. Rather, he was on his way to the airport to fly up to Washington, D.C. on Friday when he received a call from the Mayor’s office saying he had been “uninvited from a concert that (he) was supposed to headline.”

In a phone interview on Monday with Voice of the Voiceless (VoV), Rob Marus, Communications Officer of the Washington, D.C. Mayor’s Office, confirmed that, “You cannot be discriminated against (in Washington, D.C.) because of your sexual orientation.” When asked if the Mayor’s office was aware that former homosexuals are covered under the Washington, D.C. sexual orientation non-discrimination laws, Marus commented: “Yes, we are aware that former homosexuals are a protected class against discrimination in the District, and yes, Mr. McClurkin has full freedom of speech and expression.”

So if McClurkin has full freedom of speech rights and is protected under sexual orientation non-discrimination laws, then Mayor Gray and the Washington, D.C. Arts and Humanities Commission seem to have committed a crime by eliminating McClurkin from the concert due to his statements on homosexuality and his ex-gay orientation.

In a statement over uninviting McClurkin, Mayor Gray said “the purpose of the event is to promote peace and harmony. That is what King was all about.”

But it was gay activists who threatened to protest and cause dissention at the event due to their intolerance for ex-gays and McClurkin’s views, not ex-gays and Christians protesting against inclusion for lesbian, gay, bisexual, and transgender (LGBT) persons at the MLK Jr. Memorial Concert.

“If these gay activists were really about “peace and harmony” they would have come together and supported McClurkin’s music and participation, despite their differences,” commented Christopher Doyle, President and Co-Founder of Voice of the Voiceless. “Rather than focusing on McClurkin’s views of homosexuality and his decision to leave the gay life, these activists should have, in the spirit of cooperation, focused on what brings us all together – our differences. Instead, it proved to be yet another assault on freedom of speech and religious liberty by a group that demands tolerance the most, yet affords it the least.”

Nolan Williams, the concert’s director, said he would have preferred McClurkin to have performed. “Even in Tiananmen Square, they were singing ‘We Shall Overcome.’ The fight for human rights is a global fight that has to bring us together,” Williams said. “That has to bring us together whenever there are differences of opinions or differences in views. We still need to find a place to come together even when we don’t agree.”

It was later reported by The Christian Post that McCluklin’s promoters tried to have his act go on as scheduled and even rallied local D.C. pastors to put pressure on the mayor, but “the mayor’s office systematically and continually shut it down…” claimed McClurkin. Mayor Gray “refused to concede,” even after some pastors advocated on his behalf, McClurkin added.

In his video statement online, McClurkin said: “There should be freedom of speech as long as it’s done in love,” adding that he believes it is unfortunate that in today’s world, “a black man, a black artist is uninvited from a civil rights movement depicting the love, the unity, the peace, the tolerance.”

After consulting with the DC Office of Human Rights, VoV was sent the following statement yesterday afternoon:

“We are fortunate that in the District of Columbia, individuals cannot be discriminated because of their sexual orientation or gender identity and expression. In 2009, the DC Superior Court ruled that those who identify as ex-gay are protected under the sexual orientation trait of the DC Human Rights Act, the District’s non-discrimination law. Therefore people who identify as ex-gay can file a complaint with our office if they believe they have been discriminated against while accessing housing, employment, a public accommodation or educational institution.”

Now, the question remains as to whether the D.C. Office of Human Rights will actually implement these laws and force Mayor Gray to comply with his own order, which forbids the District government and its agencies from discriminating against persons on the basis of sexual orientation. The order reads: “The Director of the D.C. Office of Human Rights, or the designee thereof, is authorized and directed to implement this Order and to monitor the compliance of executive departments and agencies with its directives.”

Therefore, the D.C. Office of Human Rights is obligated to take action and monitor the compliance of the D.C. Commission of the Arts and Humanities, which made the decision to remove Donnie McClurklin. The D.C. Office of Human Rights should also urge Mayor Gray to follow his own order which demands that “discrimination in violation of the Act will not be tolerated. Violators will be subject to disciplinary action.”

Stand with us and Demand that Mayor Vincent Gray and the Washington, D.C. Commission on Arts and Humanities Apologize For Discriminating Against Grammy-Award Winning Gospel Singer and Ex-Gay Donnie McClurkin and for the D.C. Office of Human Rights to force the Mayor and D.C. Commission on Arts and Humanities to comply with the Mayor’s own anti-discrimination Issuance. Click here to sign the petition.

Christopher Doyle, M.A. is the Co-Founder and President of Voice of the Voiceless. For more information, visit: www.VoiceoftheVoiceless.info