Human Rights Campaign (HRC) has been one of the most outspoken proponents in the effort to ban Sexual Orientation Change Effort (SOCE) therapy for minors. They have aided gay activist organizations in California and New Jersey who successfully passed laws to ban SOCE therapy in 2012-2013, and have undoubtedly played a role in the sixteen bills that were introduced in state legislatures across the United States in 2014, fourteen of which already failed this year thanks in part to the #TherapyEquality campaign of Voice of the Voiceless (VoV). 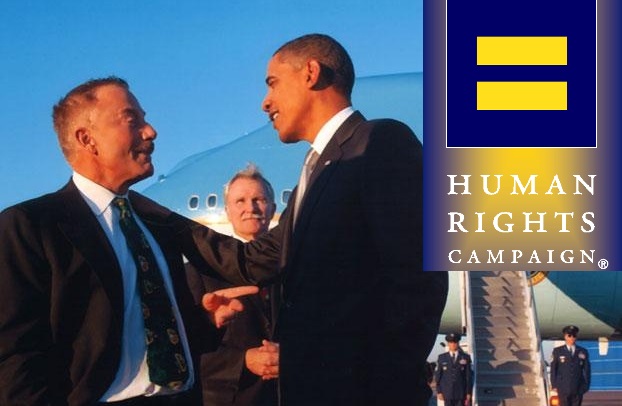 HRC Founder and current member of the Board of Directors, Terrence Bean, shaking President Obama’s hand. Photo courtesy of Barbwire.com

But now we have more insight as to why HRC and other gay activists don’t want their victims to have access to SOCE therapy. On Wednesday, detectives from the Portland police Sex Crimes Unit arrested 66 year-old Terrence Patrick Bean, Founder  of the Human Rights Campaign and current member of their Board of Directors, on two counts of third-degree sodomy, a felony, and one count of third-degree sex abuse, a misdemeanor. His victim was a 15 year-old boy.

“It is outrageous and tragic that the Founder of the largest gay activist organization in the world is molesting boys, while at the same time their leadership is pushing for laws across the United States to keep those same boys out of the counseling office to heal trauma at the hands of homosexual pedophiles,” commented Christopher Doyle, Co-Founder and President of VoV. “In light of these serious allegations, we are calling on HRC to donate a considerable amount of funding in their 2015 budget to fund Reparative Therapy (or whatever preferred SOCE therapy of their choosing) for their pedophile Founder, and his victim. VoV will work with HRC to locate appropriate, highly qualified licensed counselors that are trained in advanced therapeutic techniques to heal trauma for the victim.”

In 2013, VoV named the New Jersey SOCE therapy ban law the “Jerry Sandusky Victimization Act” because it would essentially prohibit sexually abused boys from pursuing counseling to heal trauma from molestation and sort out confusion in their sexual orientation that may result from the abuse. VoV also warned that should this option for counseling be prohibited, fewer pedophiles would be reported by licensed counselors, because sexually confused adolescents might not understand that their sexual orientation confusion may be the result of molestation, and simply believe the lie that they were born gay and not seek out SOCE therapy to change. Through a myriad of lies and false testimony presented in New Jersey, that bill was passed and signed into law.

“How many more children will have to be molested before America realizes the damage being inflicted by HRC and other gay activists,” commented Doyle. “Instead of trying to keep sexually abused and confused children out of the counseling office, HRC and their allies need to take a hard look in the mirror at their tactics to secure ‘equality’ and stop using innocent, sexually confused children as pawns in their political agenda.”

Voice of the Voiceless is the only anti-defamation league for former homosexuals, individuals with unwanted same-sex attractions, and their families.