I freely admit, I have never watched a single episode of A&E’s Duck Dynasty. Quite honestly, there is nothing about the show that appeals to me. I don’t like to hunt, I can’t relate to the Louisiana back-woods culture of the Robertson family, and the thought of wearing camouflage everyday, well, frightens me. But after A&E decided to suspend Phil Robertson for his comments on homosexuality in a recent GQ expose, I became troubled.

“It seems like, to me, a vagina—as a man—would be more desirable than a man’s anus. That’s just me. I’m just thinking: There’s more there! She’s got more to offer. I mean, come on, dudes! You know what I’m saying? But hey, sin: It’s not logical, my man. It’s just not logical.”

Phil’s comments are ignorant, unintelligent, and quite honestly, stupid…AND…he has the right to say what he said and not lose his job. We live in a country where speech is protected, no matter how abhorrent or offensive someone’s opinion is, it must be allowed to be shared without fear of retaliation, or we turn into a fascist society, and that is exactly what the Gay and Lesbian Alliance Against Defamation (GLAAD) want:

“Phil and his family claim to be Christian, but Phil’s lies about an entire community fly in the face of what true Christians believe,” said GLAAD spokesperson Wilson Cruz. “He clearly knows nothing about gay people or the majority of Louisianans – and Americans – who support legal recognition for loving and committed gay and lesbian couples. Phil’s decision to push vile and extreme stereotypes is a stain on A&E and his sponsors who now need to reexamine their ties to someone with such public disdain for LGBT people and families.” 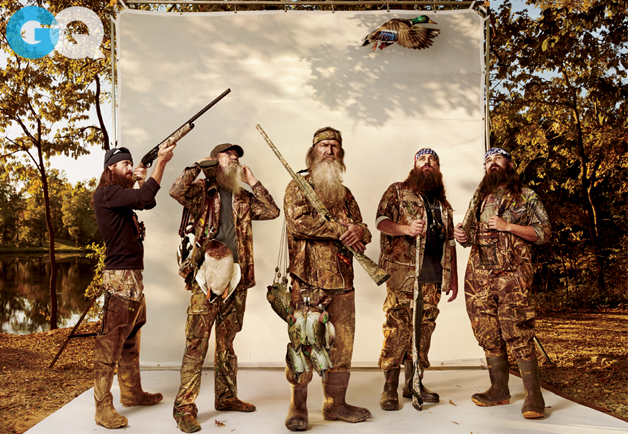 So let me get this right, GLAAD. You have recently publicly campaigned for Congress to pass the Employment Non-Discrimination Act (ENDA), which would protect the LGBT community from being fired from their jobs because of their sexual identity, but you encourage A&E to “reexamine” their relationship with Phil Robertson because of his Louisiana back-woods, Bible-thumping, red neck Christian identity? In other words, Christian employers must be tolerant of one’s sexual identity, regardless of whether it conflicts with their values and belief system, but A&E should fire Phil Robertson for his religious values?

Can someone say HYPOCRISY?

Phil Robertson went on to say that his family “really believes strongly that if the human race loved each other and they loved God, we would just be better off. We ought to just be repentant, turn to God, and let’s get on with it, and everything will turn around . . . we never, ever judge someone on who’s going to heaven, hell. That’s the Almighty’s job. We just love ’em, give ’em the good news about Jesus—whether they’re homosexuals, drunks, terrorists. We let God sort ’em out later, you see what I’m saying?”

We get it GLAAD. Phil Robertson’s comments are rather distasteful. Some might say HE is distasteful. But you can’t have it both ways. Tolerance is for everyone, not just some.

In the words of the American Civil Liberties Union (ACLU):

“The First Amendment to the United States Constitution protects speech no matter how offensive its content . . . how much we value the right of free speech is put to its severest test when the speaker is someone we disagree with most. Speech that deeply offends our morality or is hostile to our way of life warrants the same constitutional protection as other speech because the right of free speech is indivisible: When one of us is denied this right, all of us are denied.”

If you agree with me, here are three things you can do: