As a response to the 9th Circuit Court of Appeals’ refusal to hear an appeal over the 2012 California law prohibiting Sexual Orientation Change Effort (SOCE) therapy for minors, it has been open season for anti-therapy activists. To compliment existing laws in New Jersey and the Golden State, legislation has also been introduced in Massachusetts, Pennsylvania, Washington, Ohio, Washington, D.C., Florida, Minnesota, New York, Maryland, Hawaii, Virginia, Vermont, Wisconsin, and Illinois. Pundits across the political spectrum are anticipating more laws to come in 2014.

A February 16 article in The Washington Times predicted that such laws would likely follow the path of states legalizing gay marriage, and perhaps even pave the way to a national ban if anti-ex-gay advocates were to gain more power on the federal level, while a February 12 editorial in the New York Times suggested that a wiser path would be for “victims” to use legal measures to quell the “deceptive practices” of those who offer SOCE therapy. After all, it’s a well-known fact that such therapy for minors has been “proven” to be “ineffective” and “harmful.”

However, recent legislative efforts by activists in Virginia and Washington have failed, and a hearing in Maryland on similar legislation was cancelled, partly because the lies and half-truths of activists are catching up to them. In Washington, a witness testifying in a January committee hearing said that a licensed therapist forced a child to watch pornography while in an ice bath so that the client would associate sexual arousal with pain. However, when questioned after the hearing, the woman refused to provide the name of the therapist and when it happened; nor was she willing to do any research to help uncover whether, if it had in fact happened, it was a licensed therapist.

In a senate hearing in February, a representative of the Washington Department of Health, which has jurisdiction over professional licensing and fields approximately 10,000 complaints a year, said that the current staff has 11 years of institutional knowledge and no one was aware of a single complaint alleging that a licensed therapist had attempted to coerce someone into not being gay. 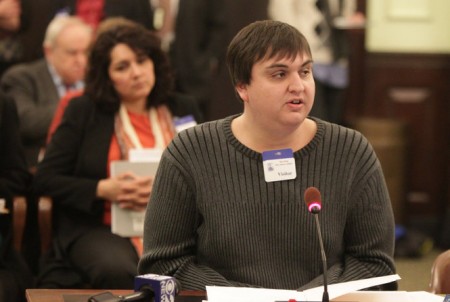 Transgender activist Brielle Goldani testifying in March, 2013 in front of the New Jersey Senate. Goldani alleged to have been electroshocked at a “conversion therapy torture camp” in Ohio in 1997

This story sounds eerily similar to the disaster witnessed in New Jersey last year, when transgender activist Brielle Goldani claimed to have been sent to a “conversion therapy torture camp” in Ohio in 1997. Goldani alleged to have been electroshocked at the month-long “True Directions” camp in an attempt to make him, now her, straight. Yet, an investigation published at WorldNetDaily.com revealed that the entire testimony was a fraud, taken directly out of a Hollywood production starring drag queen RuPaul.

Tall tales of “therapy torture” aside, the larger problem with this legislation is the foundation of facts, or lack thereof, to substantiate such prohibitions. While anti-therapy advocates assert that “rigorous studies” have found SOCE therapy to be “harmful” and “ineffective” for minors, there is no scientific foundation for this assertion. To date, there have been no outcome-based studies published in peer-reviewed journals that have followed minors undergoing SOCE therapy. Rather, these advocates have used sociological data to argue that efforts to change should be made illegal.

While family rejection of gay-identified youth may indeed be a risk factor for negative outcomes, the aforementioned study did not examine outcomes of youth who voluntarily underwent SOCE therapy for unwanted same-sex attractions.

In my clinical experience, I have worked with roughly 50-75 adolescents (mostly young men) who have been distressed by homosexual desires that did not align with their values and life goals. In the vast majority of cases, the youth who entered therapy did not identify themselves as gay, but rather, believed they were inherently heterosexual with unwanted homosexual desires. For these clients, underlying issues for the development of same-sex attractions are identified and resolved over the course of treatment, with outcomes typically consisting of a reduction of homosexual feelings, along a continuum, and an increase in heterosexual feelings.

These clinical outcomes are consistent with epidemiological data that has found homosexual feelings in adolescence to be fluid, rather than fixed. Longitudinal studies by Savin-Williams & Ream (2007) and Ott et al. (2011) following large samples of youth found that seventy-five and sixty-six percent of adolescents, respectively, who initially identified their sexual orientation as “homosexual” or “unsure,” reported exclusive heterosexual attraction at follow-up. In contrast, only two percent of youth who identified a heterosexual orientation in the Savin-Williams & Ream study reported a homosexual orientation at follow-up.

While most people would agree that forcibly subjecting gay-identified youth to undergo therapy to change sexual orientation is wrong, that does not mean the state should remove the option for youth (especially those who experience homosexual feelings due to sexual abuse) to explore the origins of their same-sex attractions and consider whether they want to pursue therapy that affirms their self-identified and preferred heterosexual identity.

While the gay activist attorneys at the Southern Poverty Law Center may find SOCE therapy to be at odds with their political agenda of shutting down discourse on homosexuality, they cannot bully their way into redefining the nature of sexual orientation, which according to renowned sex researcher Fritz Klein, is a “dynamic, multi-variable process” that is composed of sexual and non-sexual variables which differ over time. These variables include sexual attraction, fantasy, and behavior, as well as emotional and social preference, lifestyle choice, and self-identification.

Simply stated, an individual’s sexual and gender identity is up to the individual to decide, and is subject to change throughout the lifespan. In fact, Facebook agrees insomuch as they now allow users to choose from over 50 sexual and gender identities. At any point, individuals can change their identity based on how they feel. For example, when I was age thirteen, I might have identified myself as a homosexual. Ten years later, I would have described myself as a heterosexual. This past Saturday, I classified myself as gender non-conforming, but on Sunday, cisgender felt right.

It is troubling that professors of queer studies at major universities discuss the fluidity of sexual orientation while celebrating the sexual freedom in the gay and lesbian community, but when someone suggests that homosexuality might not be immutable for all, feathers get ruffled. The truth is, some individuals can change who they love, and who they are attracted to – my experience of change from homosexual to heterosexual proves this – and today, I am married to a beautiful woman and we have three children.

But don’t take my word for it; ask New York Mayor Bill De Blasio’s wife, who was once a lesbian. When queried as to how she went from being a lesbian to falling in love with Bill, writer and poet Chirlane McCray said, “By putting aside the assumptions I had about the form and package my love would come in. By letting myself be as free as I felt when I went natural.”

Just in case you were wondering, no reports have surfaced that indicate McCray was tortured or forced into this marriage. But then again, we’re barely into 2014, and there is plenty of time for activists to make up stories that go unchallenged in the mainstream media (Note: this article was originally published on March 13, 2014 at: http://www.christianpost.com/news/setting-the-record-straight-on-gay-conversion-therapy-for-minors-116108/).

Christopher Doyle is a licensed clinical professional counselor and the director of the International Healing Foundation. He is also the Co-Founder and President of Voice of the Voiceless. His work has been featured in USA Today, Washington Post, Associated Press, NBC News, The Huffington Post, AOL, The Christian Post, and many more. For more information, visit: www.ComingOutLoved.com and www.VoiceoftheVoiceless.info.