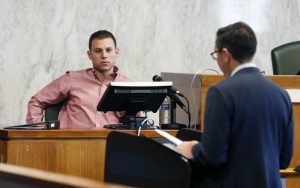 Last week, a historic lawsuit got underway, pitting the far-left Southern Poverty Law Center (SPLC), with an endowment over $300 million, against a small, Jewish non-profit counseling organization called Jews Offering New Alternatives for Healing (JONAH). Dubbed as the “Trial of the Century,” the SPLC is representing four former clients who are suing JONAH under New Jersey’s Consumer Fraud law, alleging they were promised they would go from “gay” to “straight” in 2-4 years.

As an expert witness in the case, I read through thousands of depositions for both sides in preparation for trial, which I then used to formulate a report that was also based on my clinical practice with over 150 clients who experienced unwanted same-sex attractions (SSA). I also researched and cited over 200 hundred peer-reviewed journal articles that have been published in the scientific literature in the last century that demonstrates the mutability of homosexuality and the efficacy and scientific background of the counseling techniques utilized by JONAH.

This spring, the SPLC motioned the court to disqualify myself, as well as several other well-known mental health practitioners in our field that were named in the case to provide expert witness to the practices of JONAH, including Dr. Joseph Nicolosi and Dr. James Phelan. The SPLC claimed that I and other witnesses were providing scientifically refuted testimony that was outside the mainstream opinion of professional mental health organizations, chief among them, that we all considered homosexuality to be a mental illness. For the record, I have never publicly called or labeled homosexuality as such, but nevertheless, I and several others were dismissed for this reason.

On the other hand, the SPLC was allowed to keep all of their expert witnesses, none of whom have ever practiced therapy for clients with unwanted SSA. In fact, all of these witnesses believe that gay-affirming therapy is the only method a counselor should employ, whether a client’s homosexuality is wanted or undesired, despite the fact that there is no compelling scientific evidence that suggests gay-affirmative therapy is more effective than efforts to resolve unwanted homosexual feelings. Unfortunately, these little-known facts are rarely if ever reported by the media.

In fact, the sensationalism by the SPLC of some of the practices employed by JONAH life coach, Alan Downing, has undoubtedly played a factor in the pronouncement of judgment by the liberal press. Even before the trial began, the far left media began spreading the SPLC’s lies and actively distorting the evidence of what actually happened in sessions between Downing and some of these clients.

One of the worst purveyors of this spin is blogger Scott Bixby, who writes for Mic.com, a fringe liberal website that has recently been heavily funded by far-left millionaires seeking to indoctrinate millennials, most of whom have two-minute attention spans and are easily impressed by the website’s colorful graphics and tabloid-style headlines.

For example, Bixby only reported the side of SPLC when writing of the case, spinning key disputed details of a coaching exercise Downing has been criticized for using to heal body shame. In a later article after the trial got underway, Bixby used the SPLC’s angle and portrayed Downing as a pervert who was “collecting shirtless photographs” of his client. In actuality, Downing snagged the photos from the client’s (Benjamin Unger) Facebook page after the lawsuit was filed and sent them to his lawyers at the Freedom of Conscience Defense Fund to prove that Unger, who took half-nude photos of himself in New York City, had no problem baring his half-naked body.

Truly, Unger’s public exhibitionism was much more vulnerable and exposing than the body shame exercise Downing employed. Based on the psychological concept of “peak experiences” developed by Abraham Maslow and Paul Bindrim, Downing instructs clients to remove an article of clothing for every negative message they believe about their body, and then once undressed, put on an article of clothing with a positive message. The basic concept is that physical nakedness facilitates emotional vulnerability and speeds up the client’s work towards resolving issues of trauma around the negative beliefs of one’s body.

While this is not a mainstream technique used by licensed counselors working with clients who experience unwanted SSA, and some may consider unorthodox, these practices have been used for decades in experiential healing weekends helping gay men feel better about their bodies. For example, the Mankind Project and Body Electric, two gay-affirming healing organizations, use very similar techniques to cater to the needs of the LGBT community. So one must ask the question: Why is the SPLC ok with groups using nudity to help gay men feel better about themselves, but calls Downing’s exercise to help clients with unwanted SSA heal body shame, “harmful” consumer fraud?

The answer, of course, is this trial is not about a couple of questionable techniques used by Downing. It’s entirely about the goal of overcoming homosexuality that JONAH was helping their clients pursue. The SPLC’s admitted objective to this case is to shut down every single organization and counselor, licensed or not, who disagrees that same-sex attraction is in-born and unchangeable. Unfortunately, the liberal media is cheering them on while only reporting one side.

Whether you agree with JONAH or Downing’s methods (which by the way, the body shame exercise constituted a very small percentage of the overall counseling methods used), it’s plain to see the hypocrisy and blatant disregard the SPLC and the media has in telling the whole truth. But then again, in today’s sexual culture wars, the ends justify the means. Except if that end is overcoming unwanted same-sex attractions. In that case, the “means” are always “harmful.” This article was first published at The Christian Post.

Christopher Doyle is a licensed clinical professional counselor and the director of the International Healing Foundation (www.ComingOutLoved.com). He is also a leader in the #TherapyEquality campaign with Equality And Justice For All (www.EqualityAndJusticeForAll.org)