Watch the video on the hearing and press conference from the Christian Broadcasting Network by clicking here. On Friday, June 27 the Washington, D.C. City Council held a hearing on Bill 20-501, legislation that would prohibit minors from receiving counseling to overcome unwanted same-sex attractions. As a part of my work with Equality And Justice For All and Voice of the Voiceless, I have been following this legislation across the United States and working hard to form a coalition of ex-gays to meet with legislators and educate them on the facts of Sexual Orientation Change Effort (SOCE) therapy.

After California and New Jersey passed laws in 2012-2013 to prohibit SOCE therapy for minors, we began a grass roots campaign to educate state legislators and federal lawmakers on the actual facts. While gay activist groups have received scores of free publicity (for example, most recently a lesbian rights group who launched a campaign called #BornPerfect to end “conversion therapy” that was publicized in Time Magazine) our campaign, #TherapyEquality, has largely been unreported by the mainstream media.

But it’s not for lack of results. So far in 2014, our work has assisted in the defeat of at least thirteen bills proposing to ban SOCE therapy for minors, including: Virginia, Washington, Maryland, Illinois, Ohio, Florida, Wisconsin, Hawaii, New York, Wisconsin, Minnesota, Vermont, and Rhode Island. Simply put, when ex-gays show up and tell the truth about SOCE therapy, how it helped them, and in some cases, saved their lives, legislators have listened.

Stated another way, gays cannot speak for ex-gays. This is what we have been trying to get across in our work. But some legislative bodies still lack the desire to even listen to our stories of change. Friday’s hearing in Washington, D.C. was a prime example. Eight courageous individuals sat before a biased committee and testified about their sexual orientation change. The vast majority of these individuals testified as to having been sexually abused as children and arriving at a homosexual orientation as a result, and then doing the hard work to heal those wounds and come out of homosexuality. 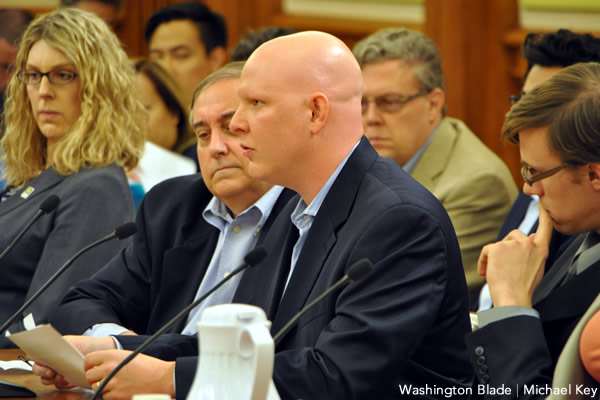 Yet, councilmembers failed to even recognize the term “ex-gay” – even when the Washington, D.C. Office of Human Rights has explicitly stated that former homosexuals, or ex-gays, are protected against discrimination under the D.C. Human Rights Act (see: PFOX vs. NEA, 2009). It was beyond offensive to listen to one councilmember state: “There is no such thing as an ex-gay,” when eight of them were sitting before them testifying. It felt like an episode of The Twilight Zone.

Even worse, one Councilman in particular, David Catania, had the audacity to lecture the ex-gays testifying and bully one client of the International Healing Foundation, who testified as to overcoming unwanted same-sex attractions through therapy. Catania stated that we are here today not to debate whether homosexuality is an illness, but rather, confront the illness of “superiority” and illness of “internalized hatred.”

Yes, he actually said that those seeking to leave homosexuality, pursue their own self-determination, and receive therapy to remain faithful to sincerely held religious beliefs, are mentally ill. Catania, who is now running for Mayor in Washington, D.C., used his ten minutes of time not to gain insight or ask questions to the many highly qualified experts in attendance who practice SOCE therapy, but rather, felt it necessary to demean, bully, and disrespect a young man who had the courage to speak about his sexual orientation change. Catania actually told this young man that there is no reason why he should want to change “a fundamental core part of who he is” and to stop hating himself. So much for tolerance!

At the end of the day, the marathon hearing saw a grand total of 32 witnesses testify on this bill. Probably the most surprising testimony of all came from Dr. Anthony Jimenez, a psychologist in the District of Columbia who spoke in favor of the ban. When questioned by Councilwoman Alexander after giving his testimony, as to whether he had ever counseled clients who has been sexually abused and were homosexual, he said “yes” and that he had helped some of these clients who were uncomfortable with their same-sex attractions, and didn’t want to identify as gay, work through the sexual abuse and unwanted same-sex attractions.

What was baffling to the entire room was the underlying notion that had not been confronted, that people are not simply born homosexual, and that some individuals who develop homosexual feelings do so because of sexual abuse. In his answers to the Councilwoman, Dr. Jimenez confirmed that in his professional experience, the fact that people are not simply born homosexual, was in fact true, and that sexual abuse certainly plays a factor for some who are same-sex attracted.

If this line of questions and answers wasn’t a nail in the coffin for gay activists trying to shut down the freedom of children, and their parents, to pursue counseling to heal sexual abuse and the homosexual feelings that result, then nothing will change the Council’s minds on this legislation.

On Monday, June 30 (three days later) the Supreme Court of the United States passed on hearing Pickup vs. Brown, a lawsuit challenging California’s ban on SOCE therapy for minors. While there is an appeal still pending on New Jersey’s SOCE therapy ban in the 3rd Circuit Court, it seems unlikely that the 9th Circuit Court of Appeals will decide to hear Pickup vs. Brown (since it already declined to hear an appeal of its original ruling earlier this year) and thus, seal the fate of California’s children who experience unwanted same-sex attraction and desire therapy to overcome.

Let’s be really clear on this fact. Parents in the state of California whose children have been sexually abused by the likes of a Jerry Sandusky and later develop homosexual feelings now will be raped a second time by the system.

It’s really hard for me, a victim of sexual abuse who had the opportunity to see a licensed counselor to heal those wounds, which ultimately helped me to overcome unwanted same-sex attractions, marry my wife of eight years, and father my three beautiful children, to convey the sense of injustice I feel by these decisions.

Indeed, our country stands at a critical point in history. Are we going to deny Christians and people of faith the right to pursue their religious convictions and freedom of conscience, or are we going to instead, bow to secularism and every manner of evil possible in our society? Are we going to turn our heads the other way when a child is raped and pretend that he is perfectly fine and that he was just “born that way” or are we going to confront the sexual abuser, demand justice, and allow that child an opportunity to heal?

Not long ago, Oprah Winfrey had on her television show over one hundred sexually abused men to discuss the effects of molestation on their lives. But the big fat lavender elephant in the room was ignored. She never asked the question: How many of you developed homosexual feelings as a result of this abuse? This article was originally published on July 2 at The Christian Post:http://www.christianpost.com/news/d-c-may-join-california-and-new-jersey-in-denying-ex-gays-therapy-122584/

Christopher Doyle is a Licensed Clinical Professional Counselor and the Director of the International Healing Foundation, a non-profit organization that has helped thousands of SSA and LGBT individuals, and their families, since 1990. He is also the President and Co-Founder of Voice of the Voiceless.